My wife Heidi and I had talked about going to see Glacier National Park for some time. We have always been fans of the national parks and it was time to see this one. We did the research, looked for a window in our daily work lives, and set out on the 18th of July.

We wanted to be sure that we could be prepared for any type of weather and based on this; we decided to take on the drive instead of fly. Because we have both flown so much for work, sometimes flying actually takes away from our time off. Crazy? Perhaps. But we do enjoy seeing the scenery along the way, so we packed up the car and headed west!

After a stop in the Badlands we arrived at our first destination, Rapid City SD. While we’ve been here quite a few times, we wanted to get a look at the “Big Heads” lit at night. We came close once, however just like a scene out of a Chevy Chase Vacation movie, they shut the lights off as we walked from the parking lot to the entrance of the park. Success this time! 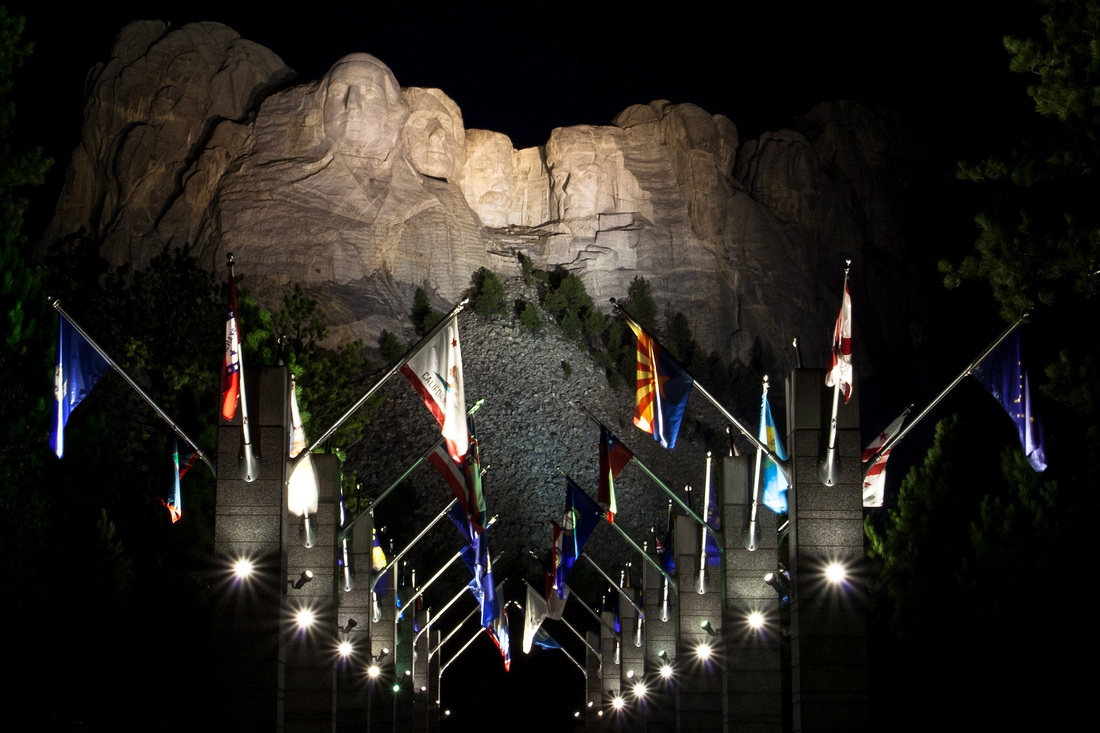 We drove through Custer State Park and made our way to Wind Cave so that Heidi could get her National Park Passport stamp. The last time through here we did all of the tours, so we didn’t stay too long. We did take the drive through Needles, and it is still spectacular as ever. Drove by Crazy Horse, and while the head of the monument has come a long way, the pictures that I have from my childhood trip, look pretty close. The time that they have spent on this amazes me – and perhaps that’s the way it should be. It’s not about the goal, but about the journey. 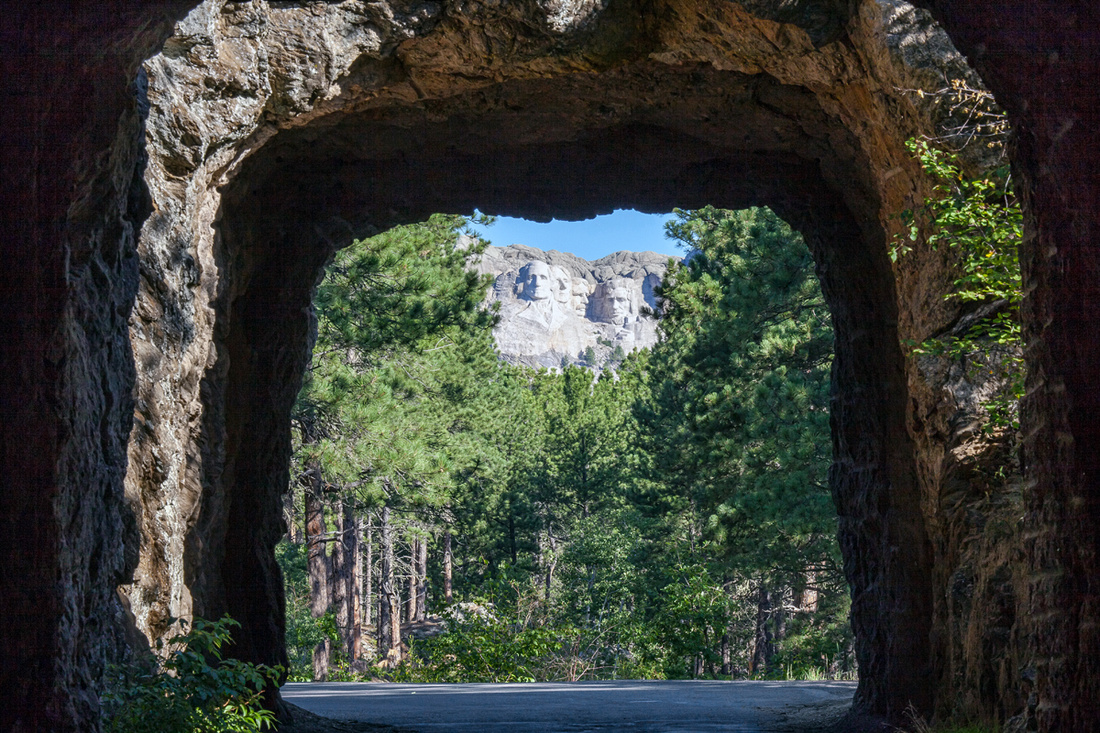 Not much wildlife, with the temperature hitting about 102.

Knowing that we had a big drive ahead of us, we pointed the car north and headed off for Great Falls MT. We arrived pretty late, but took in the spectacular views and were continually amazed by the vastness. A far cry from the congested Chicago Suburbs.

Glacier! Indescribable! We spent the morning driving the Going to the Sun road, stopping at all of the turnouts along the route. Hit Logan Pass and we were just simply awestruck looking out over the valley. I’m not a writer, so I’m not going to even try to describe how we felt or the view that awaited us. Recharged is an understatement!

We checked into Lake McDonald Lodge, one of the original hotels in the park. The lodge, which is right on the lake, has the rustic feel and the staff was awesome. While Heidi and I are used to staying in hotels through our jobs, it was a shocking, however pleasant, surprise to learn that there wasn’t air, TV, or a fridge in our room. So we had to “settle” for windows overlooking the lake and the nice 68 degree breeze blowing through the room. They did have Wi-Fi so after a quick check on the weather, which called for scattered thunder storms, we decided to stretch our legs and take the hike to Avalanche Lake.

This trail can get very crowded because it is one of the relatively easy marked trails in the park. The trail passes by Avalanche Gorge and the payoff is a beautiful waterfall fed lake. While walking this trail we noticed a lot of downed trees and were told by another hiking couple that the trees were hit by a recent windstorm. Arriving at the lake I quickly grabbed the camera and set up the tripod. While the weather may not have cooperated for photos of the lake, the peacefulness after the long drive is just what we needed. We munched on some snacks and that’s when the thunder hit. 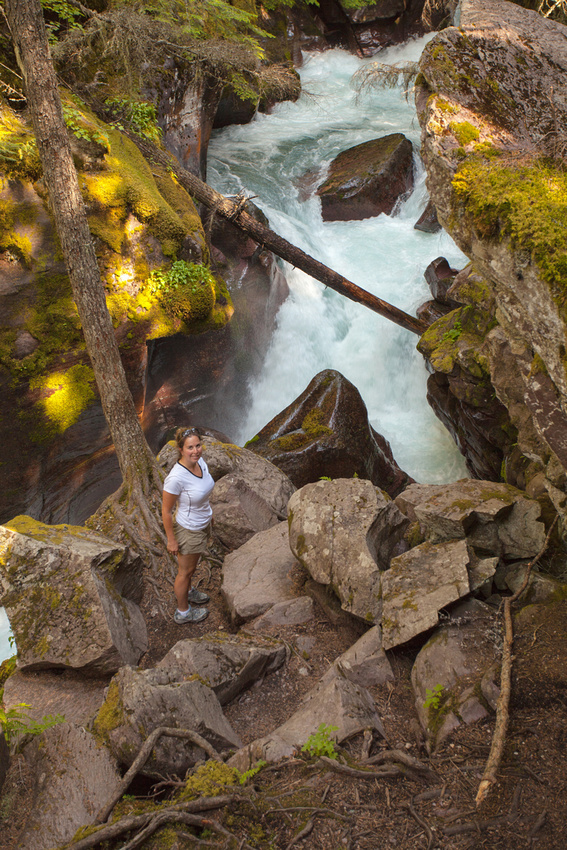 We packed up the gear and headed back – just as the storm hit. We got to the section where the downed trees were and the ones standing were bent and cracking from the wind. Yep, we now know where the term “widow makers” came from. I looked up and Heidi was gone! She had taken off running up the trail wanting to get out of that area – NOW! The wind wasn’t as bad up the trail and after a brief rain and some very close lightning strikes the storm moved on. +1 for Heidi, she brought her raincoat, I only brought a plastic bag for the camera gear! The rain really made for nice views of Avalanche Gorge; it looked so much like a true rain forest. 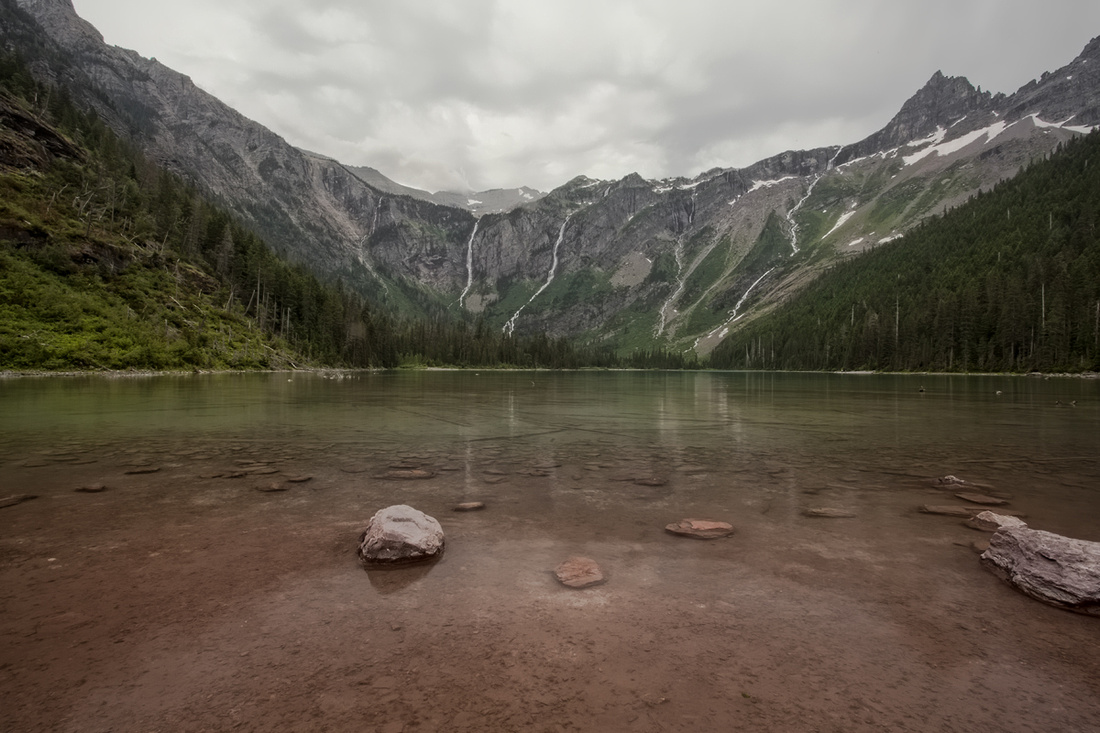 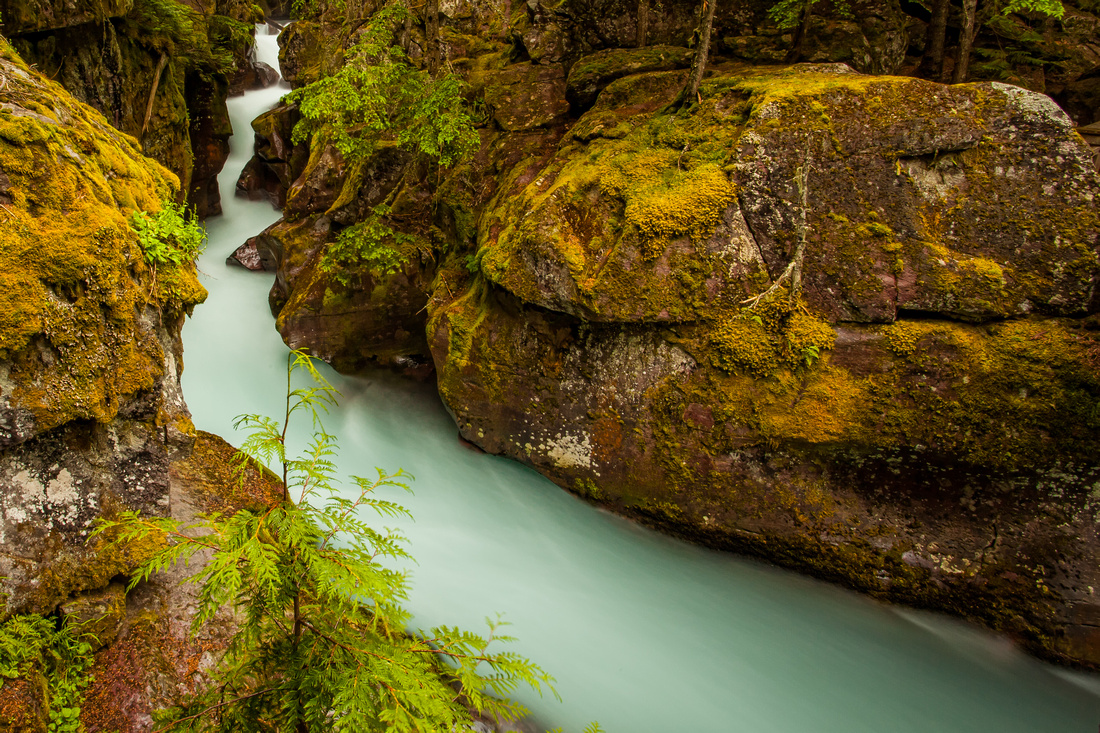 We headed back for the lodge and ate at the restaurant there. Try the Yankee pot roast – it’s a lot, but soooooo good! Met a very nice couple and swapped road stories, enjoyable evening.

Got up early to get some photos of Lake McDonald and spent the rest of the morning at the sites along the lake and turnout areas. 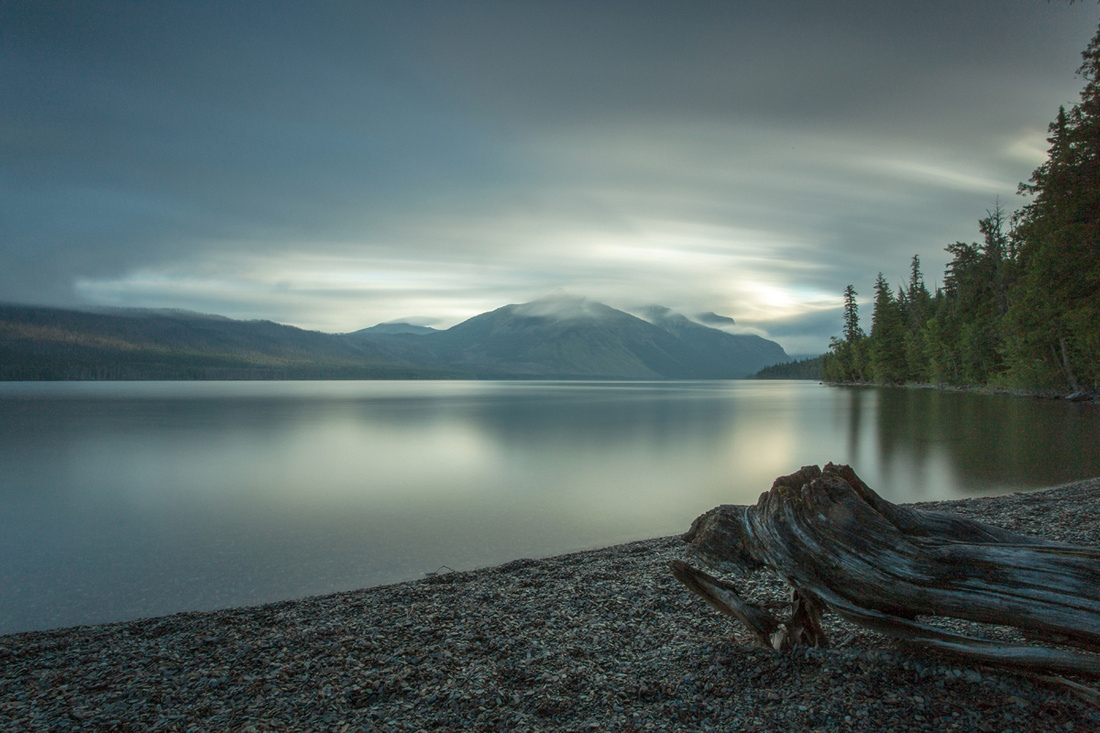 My wife and I aren’t skilled hikers. While I hike our local parks here in Illinois, they are about as hilly as a basketball court. We decided to challenge ourselves and also see some other areas of the park. We consulted a couple of maps, hotel staff opinions and our “park guide” The Photographer's Guide to Glacier National Park by Gordon Sullivan (great book by the way!) and headed to Bowman Lake, with Lower Quartz Lake as our goal.

The road to Bowman Lake would be a blast if I had driven my truck. However in the BMW it was tricky and slow going to say the least. But…Off-roading has never been so comfortable! The gravel road leading to the lake does take some time to travel as its one lane and tricky to pass other vehicles, but because it was dry, it was a pretty easy drive, just slow.

Bowman Lake is simply gorgeous! With the peaks providing the backdrop, it’s a Glacier postcard. We set our site on the trail to Lower Quartz and headed out. The trail is fairly steep and well-marked. The climb up is tough but the switch backs provide relief. The descent to the lake is steeper and at times quite the mosquito factory. Bug spray is a must here! 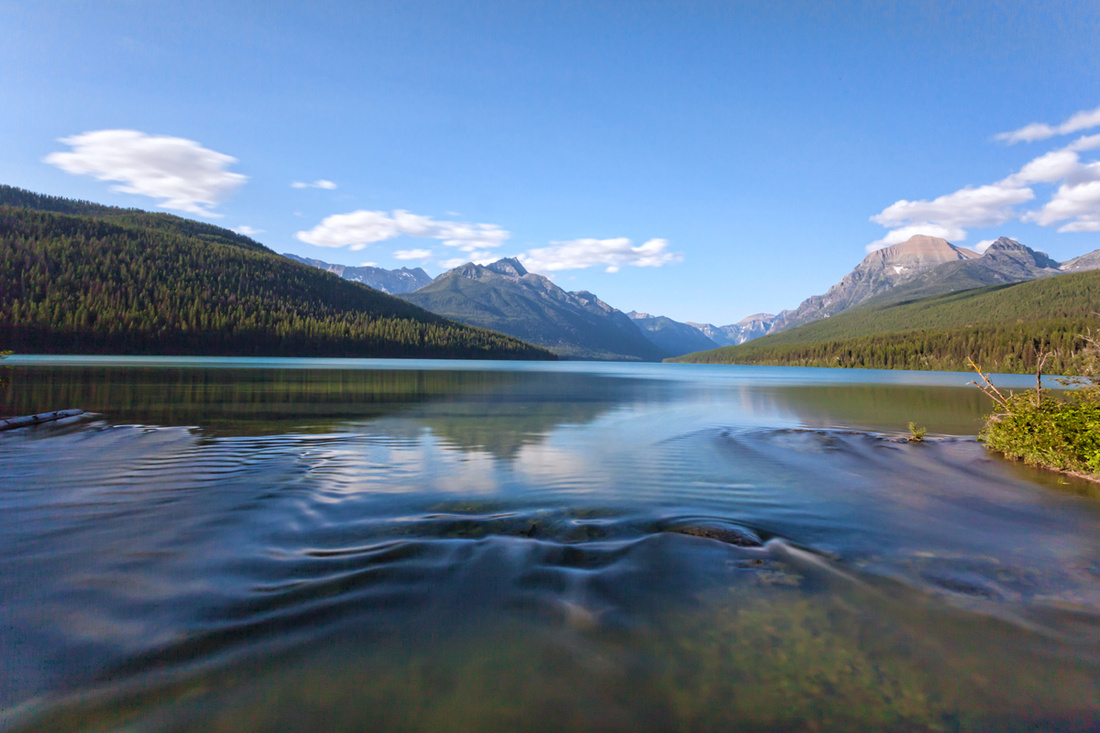 Once we arrived at the lake we sat on the footbridge that crosses the stream flowing out of the lake and had sandwiches. I think that we passed 4 hikers the entire time and it truly felt as if we had the entire park to ourselves.

Now the trip back… I had to slow down on the way back. The steeper climb was tough and I became pretty overheated. Once over, the descent down in the shade of the trees helped me return to my usual self. (Note to self…don’t eat so much)

Great hike, it felt good to push ourselves and we truly had gotten away from crowds. 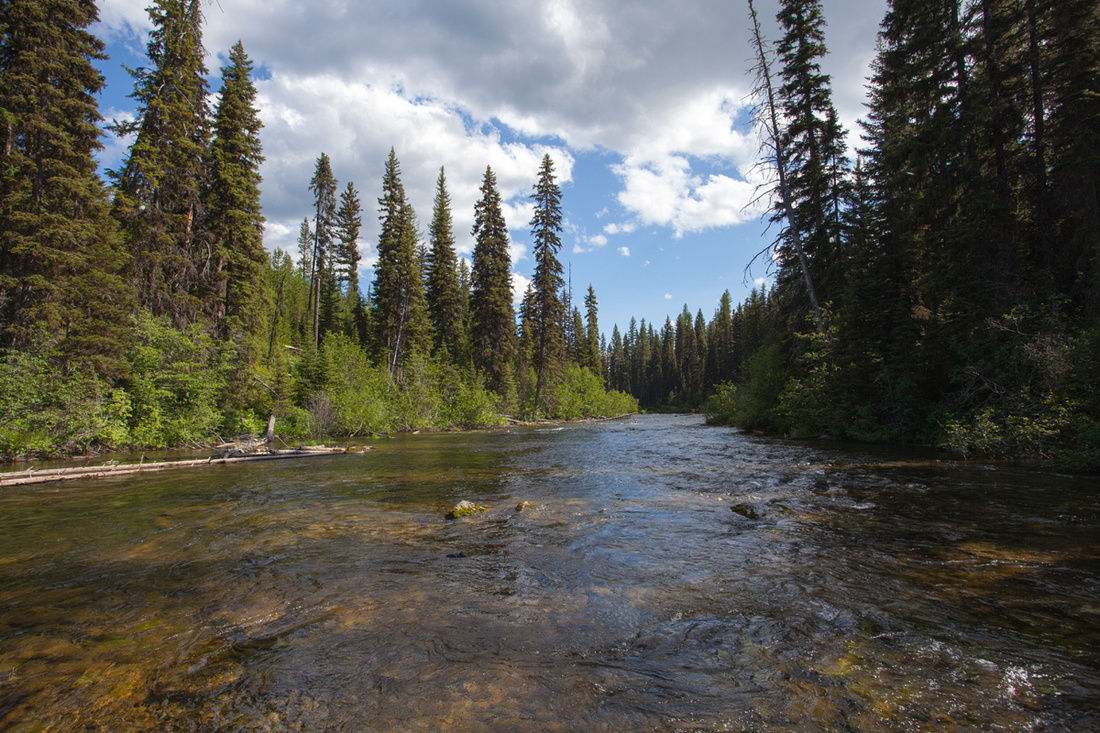 Stopped off at Apgar on the way back to the hotel, grabbed a six pack and enjoyed the evening while in rocking chairs on the porch of the hotel. Too cloudy to take night photos.

Got up early to catch the sunrise, packed and headed to Logan Pass. 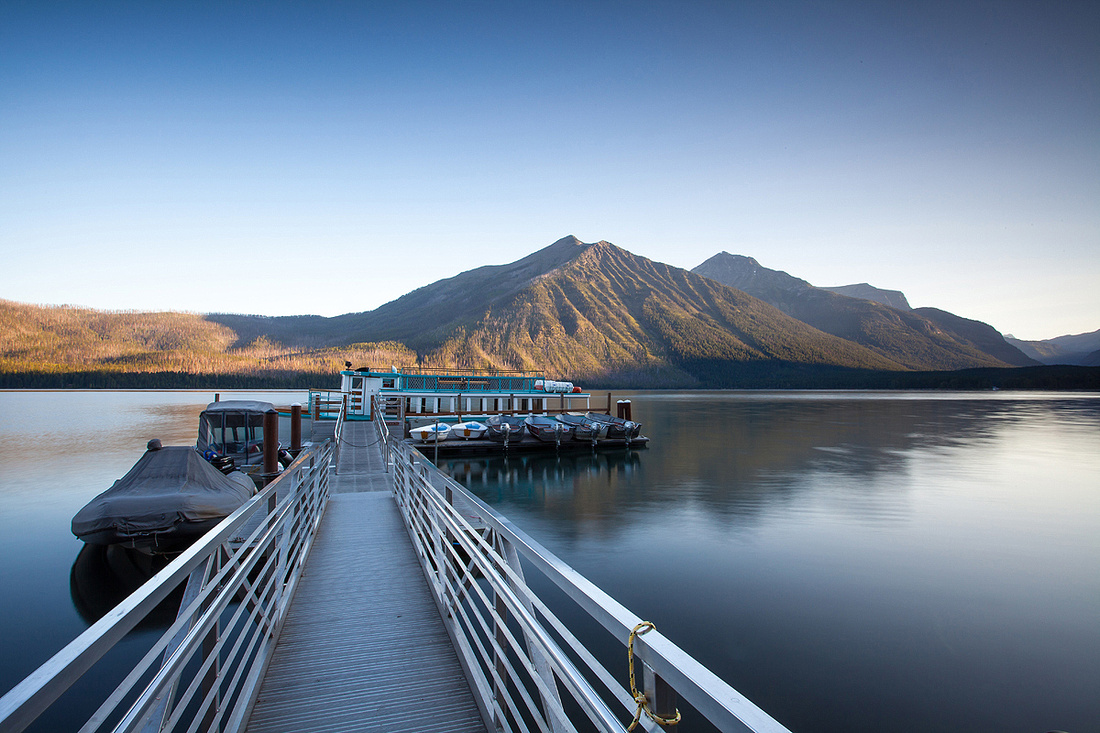 We spent most of the day making the hike to Hidden Lake. Climbing the snow pack was challenging and Heidi felt the altitude change. While the mountain goats and other animals made the trip enjoyable, the true spectacle at the start of the trail was the people watching. The start of the trail is a boardwalk which I believe entices folks to make the trip. I watched many women, carrying purses and wearing sandals slip and slide across the snow while trying to make their way across the snowpack. Truly a site to see, maybe more entertaining than watching a public boat ramp! 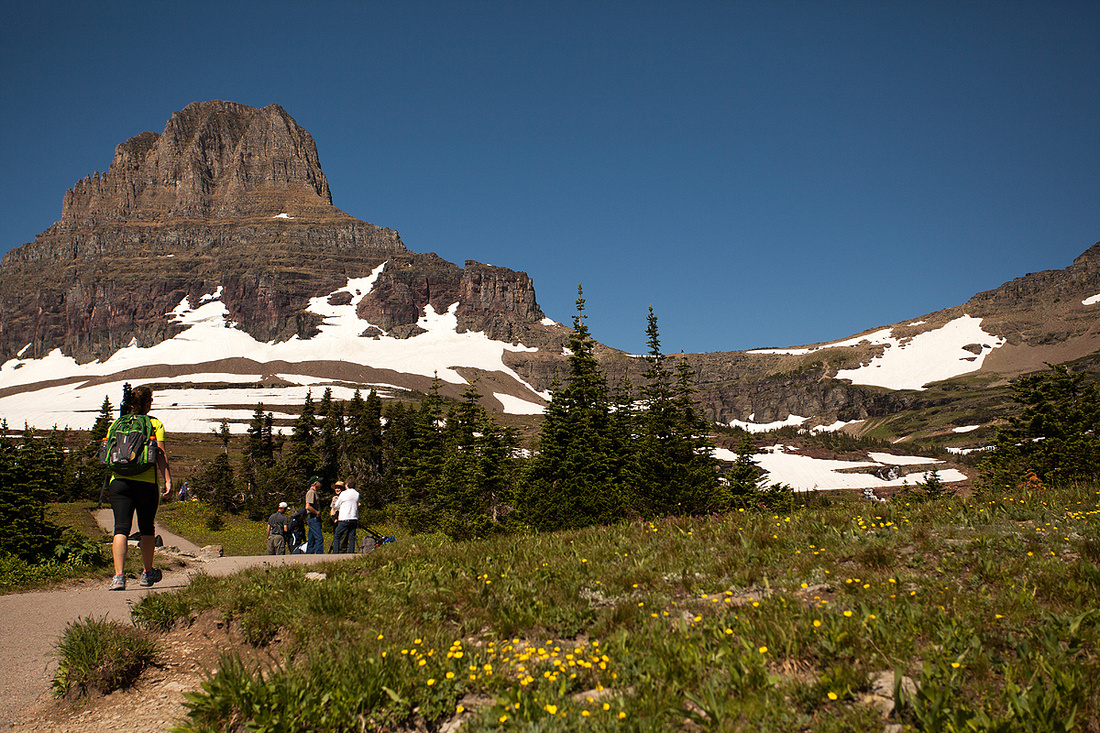 We got off trail awhile and sat and ate while overlooking the valley. (For those who know, we did watch out for plant life while making our way to the rocks.) We had many mountain goat encounters and even had a Ptarmigan come up to within a few feet of me. I’ve taken many pictures of birds, but never with a wide angle lens. 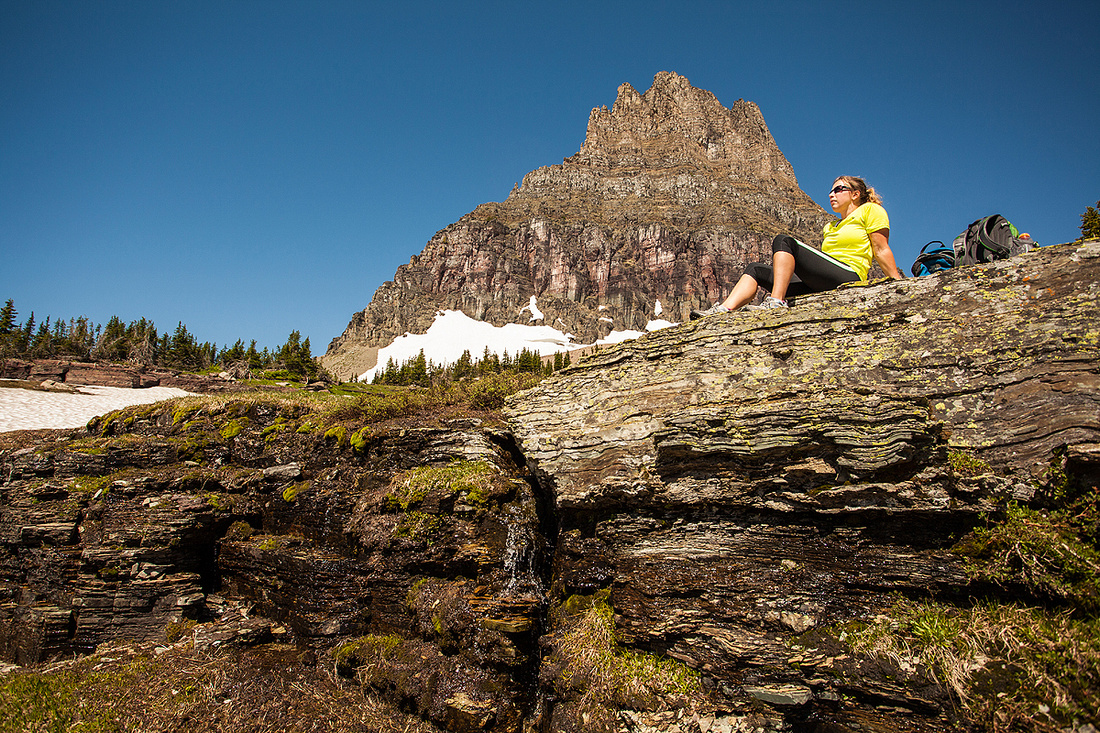 Hidden lake is another postcard. WOW! 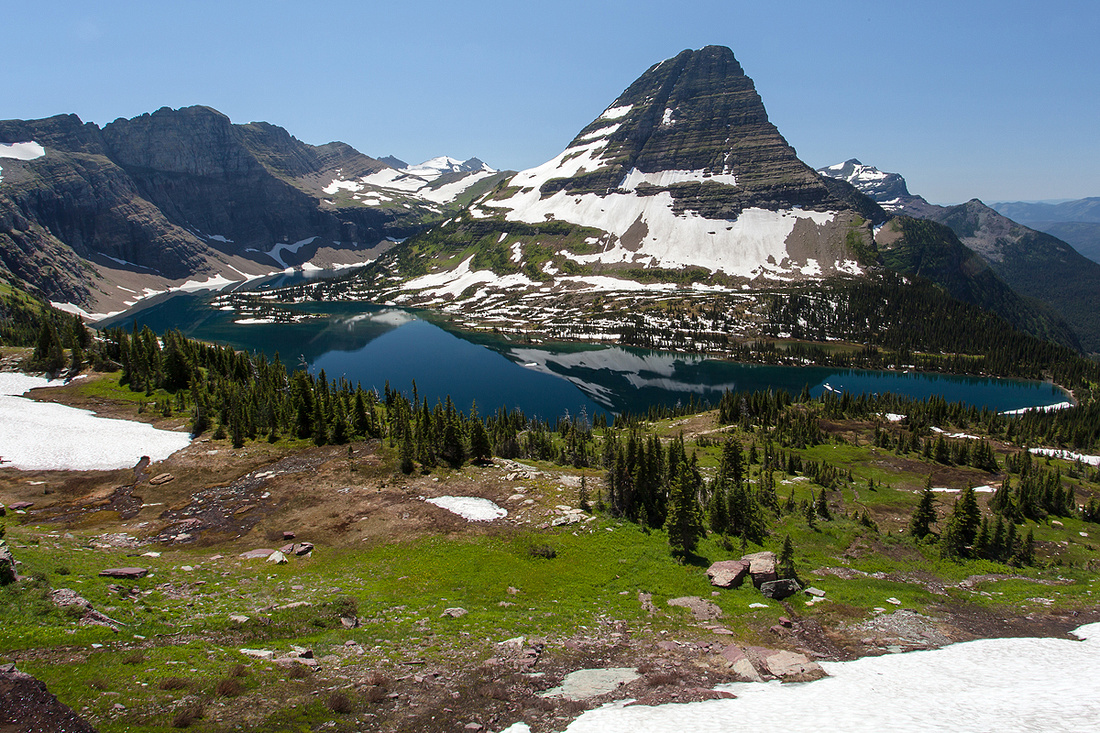 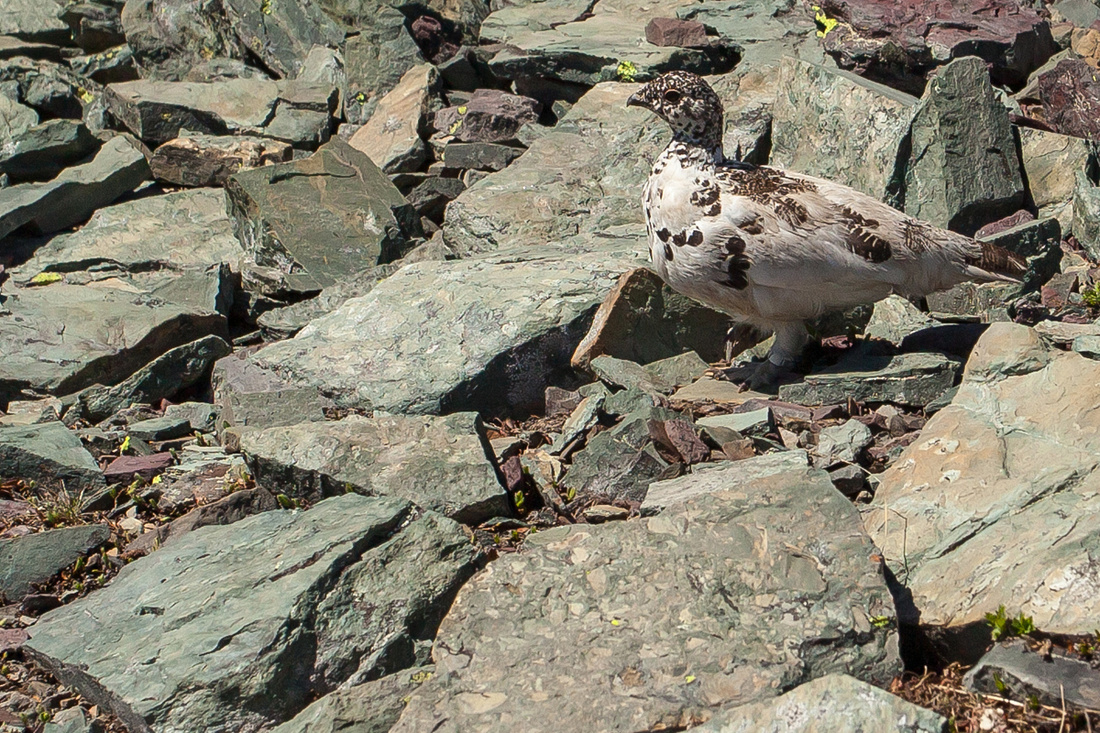 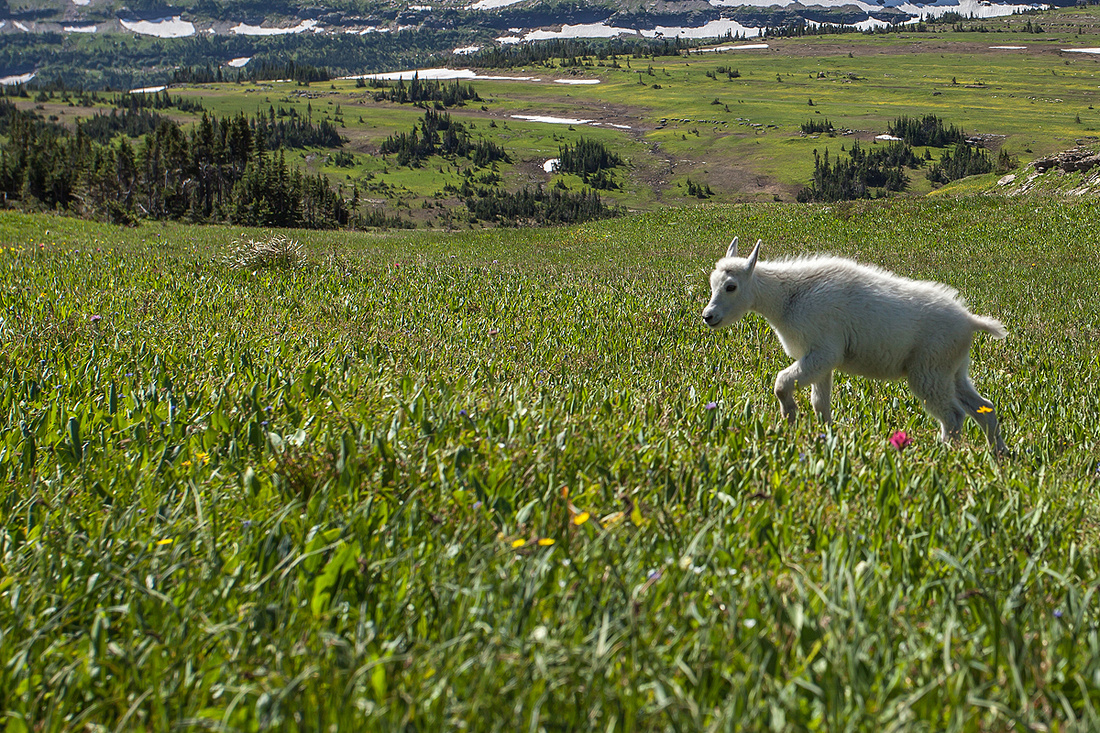 500 feet in elevation change and a slippery slope across the snow!

Don’t forget sunscreen on this hike! We had it in our pack, didn’t use it, yes we know better!

Afterwards we checked in at the Rising Sun Motel, showered and went to Many Glacier. While we planned on doing Iceberg Lake the next day we were disappointed to learn that there weren’t any icebergs this year… Cracker Lake seemed to be the way to go, until we woke up the next morning….sore and sunburned.

We ended the day and I went out to take some sunset shots, we saw out first Big Horn sheep up near Logan Pass. 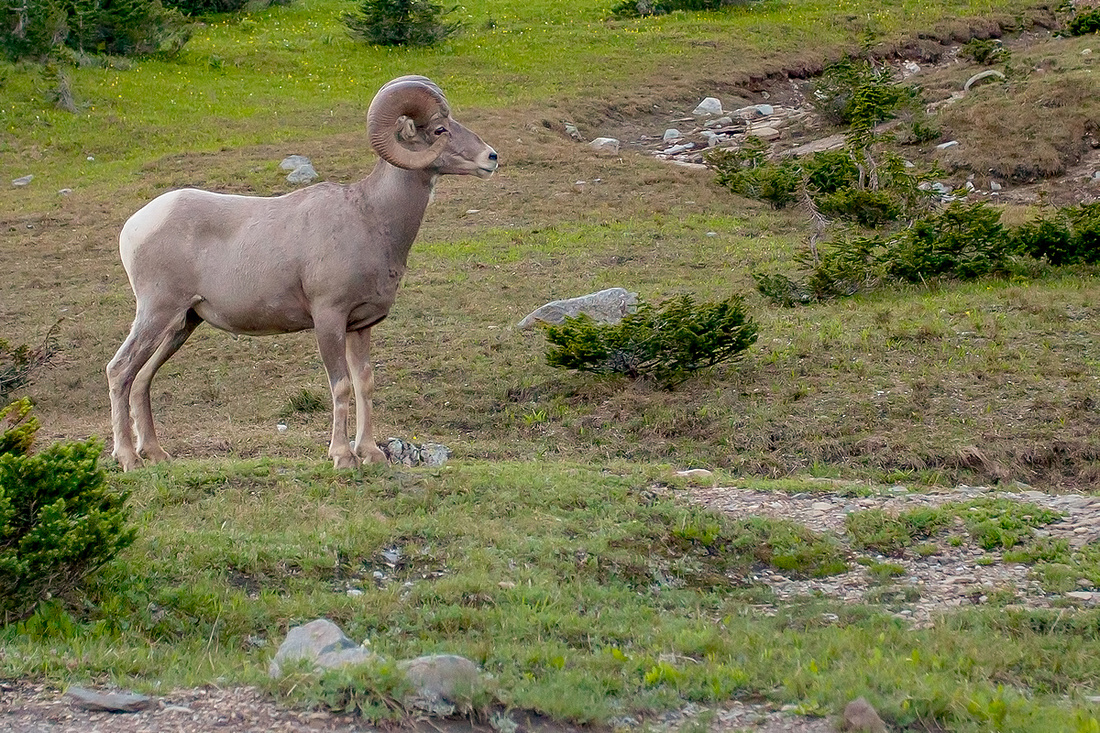 Still too cloudy for star shots…

Woke up sore and sun burnt. Took the drive to Many Glacier and didn’t feel up for the hike to Cracker Lake. We settled on the trip to Baring, St Mary’s and Virginia Falls. Trail was really crowded, but it was an enjoyable (and sometimes windy) hike along St Mary Lake. We passed a ranger and she stated that a bear had been spotted, however we didn’t get the chance to see it. The falls are awesome, and would recommend this hike for anyone that has the opportunity. 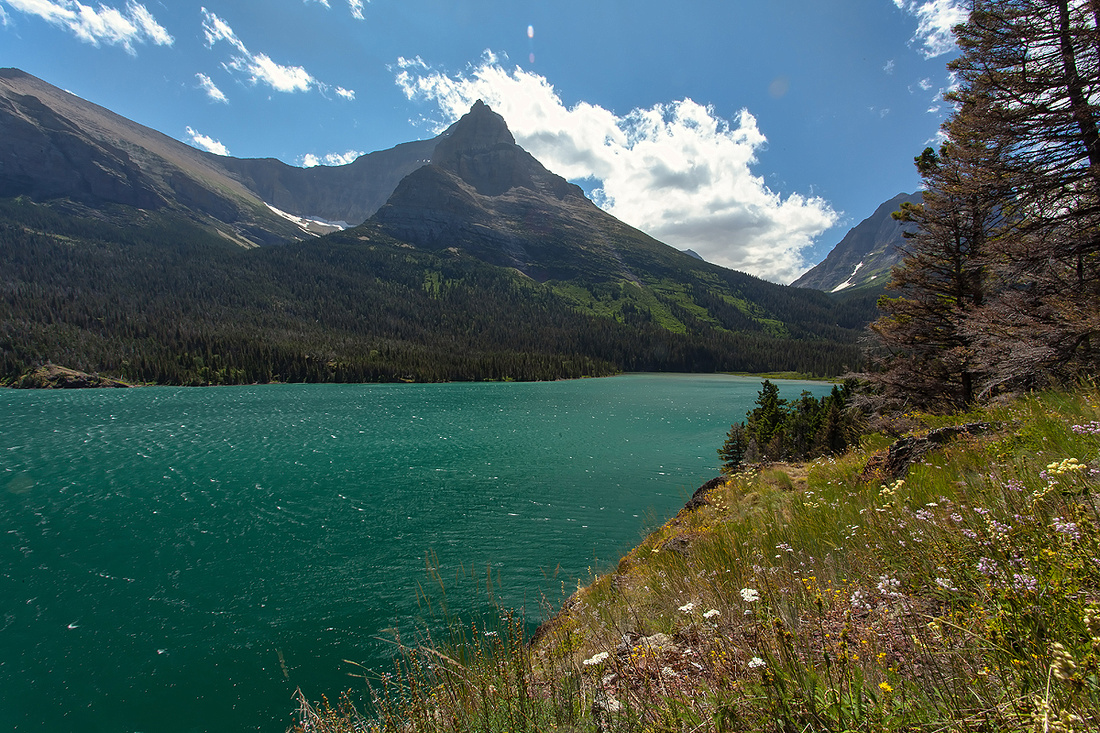 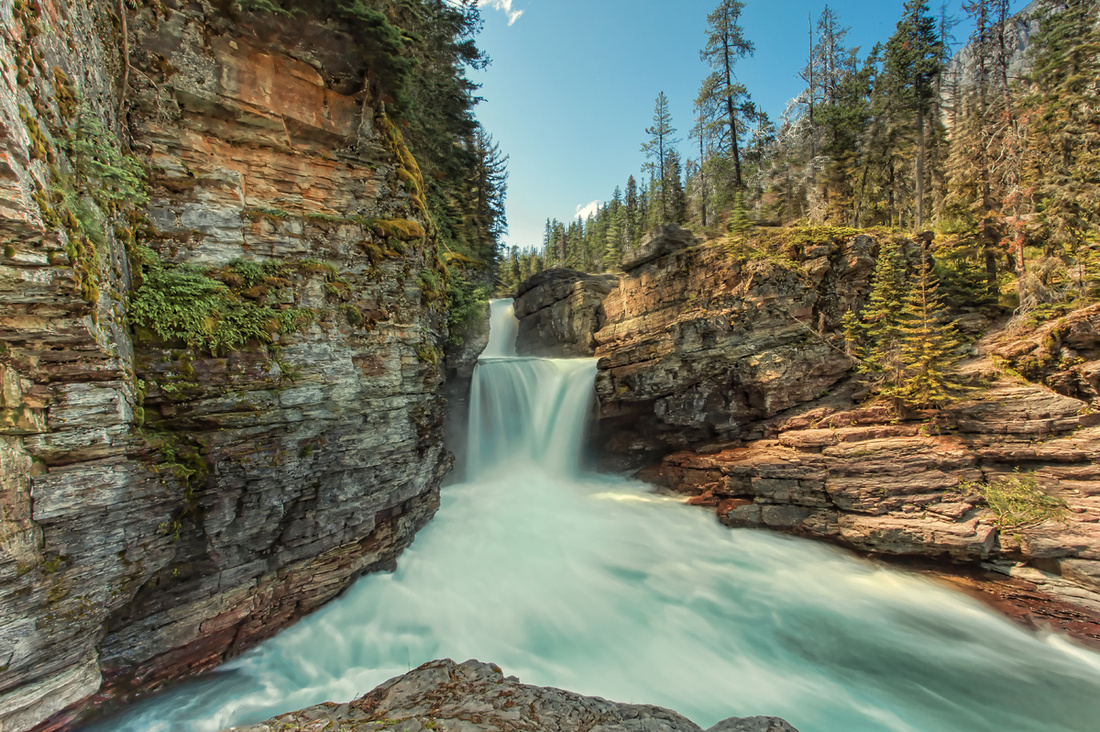 Hike from Going to the Sun Point

Heidi hit the bed pretty early and as it was our last night I really wanted to get a star shot. Winds had picked up and were blowing probably 50+ but I was determined. Started to head to Logan Pass and came across my first bear of the trip! I was the first there and was able to enjoy it before other cars came along. I was disappointed that Heidi wasn’t along to see it. 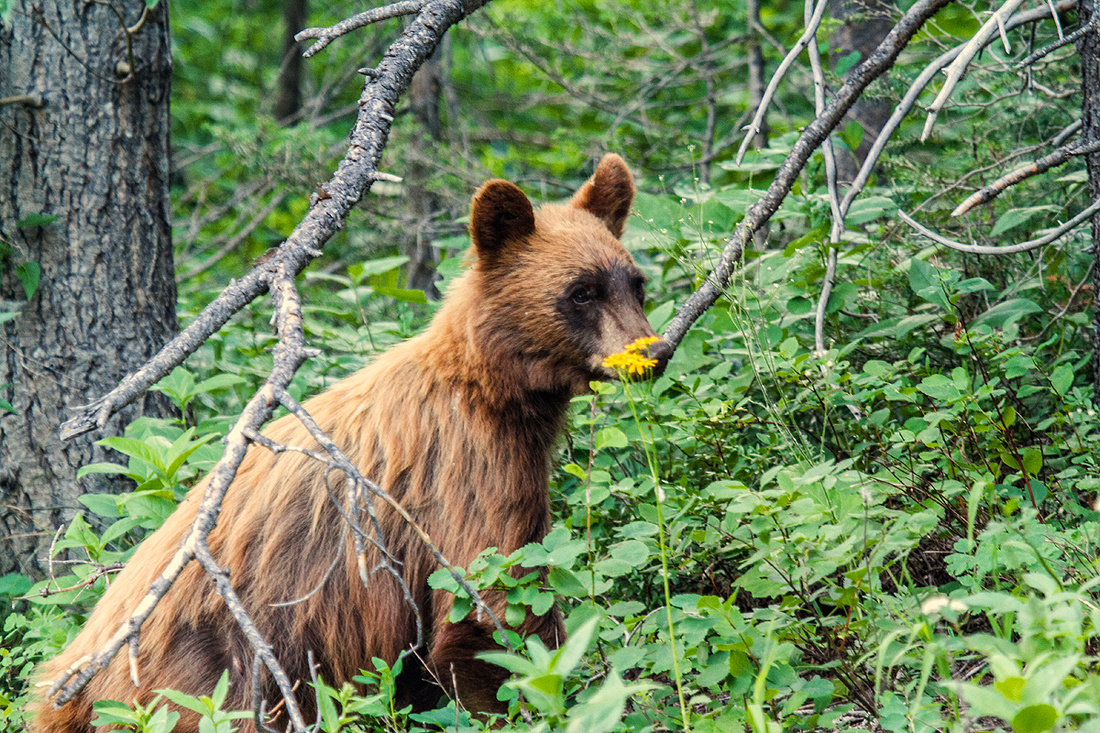 With the wind howling (boy I thought it was going to take the roof of the lodge off) I got a couple of sky pictures. 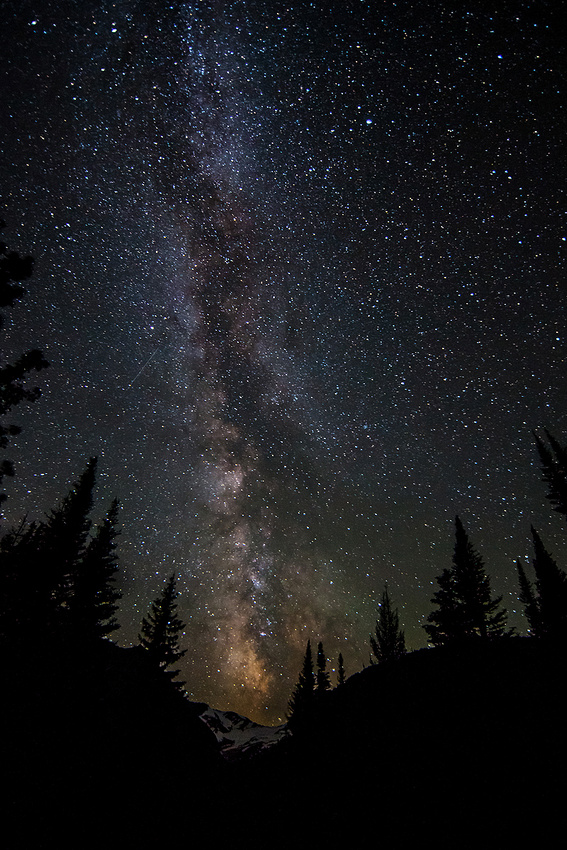 Packed up and started the journey home. Before leaving we drove through Two Medicine and took the short walk to Running Eagle Falls. What a gorgeous site! Sure hate to leave, but I know that we’ll be back. 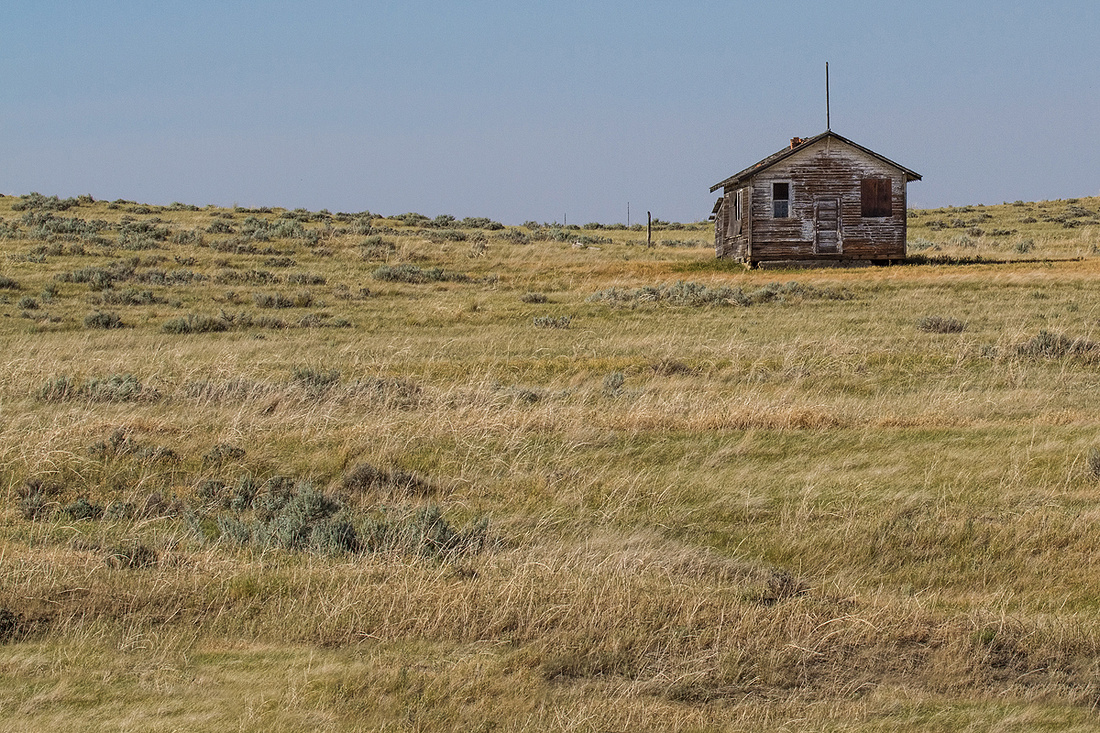 Not bad at all!

Bring sunscreen and use it!

Don’t overeat out on the trail.

Check ahead for hotels on the way home if the State Fair is going on.

Being “Off the Grid” is wonderful!

John(non-registered)
Hey, those are some great pictures. This post was very informative which is great because we are headed there for a week this summer!

I had a question, what lens did you use to grab that night shot? It looks very clear! Did you have to do a lot of post processing on it?