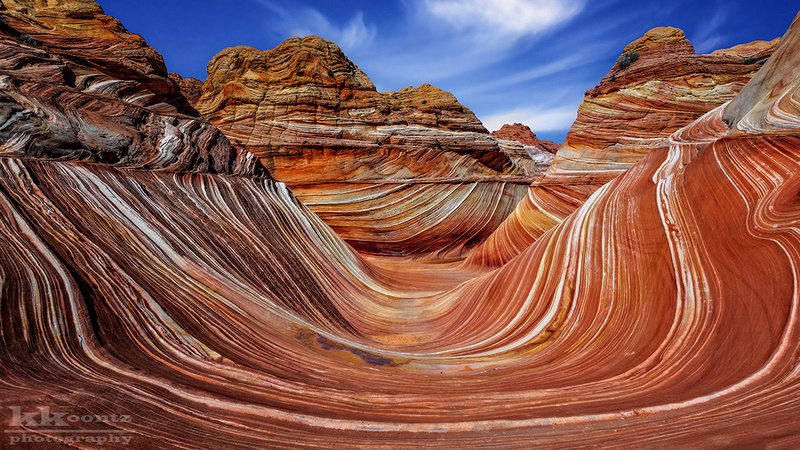 The Wave is an area of sandstone located in Arizona, just outside of Kanab Utah. It was a spot known to just a few people until July 22, 2009. That was the date that Microsoft launched Windows 7, with a beautiful photo of the wave as its desktop wallpaper. Since then, many have wanted to see this formation for themselves putting a strain on the small area. 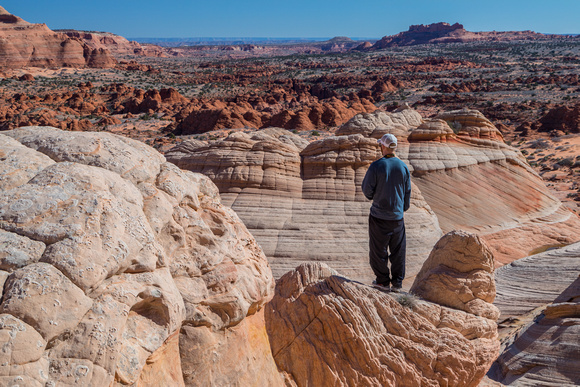 Kyle looks over the hike.

Kyle looks over the hike.

Many have called the Wave the “Holy Grail of Hikes”. Not because of the difficult hike, but due to the difficulty in actually getting to go. The Wave sits in the Coyote Buttes / Paria Canyon section of the Vermillion Cliffs National Monument and is managed by the Bureau of Land Management (BLM). Only 20 people a day (excluding guides and volunteers) are allowed to the opportunity to hike the area each day. The 20 person per day limit was set up to protect the delicate formations as the demand to see the area is constantly increasing.

To become one of the chosen few, a permit must be obtained. Don’t think that you can enter the area without one, as guides and volunteers are checking daily, and hefty fines are imposed for the rule breakers.

Just 10 online permits and 10 walk-in permits are issued for each day. The 10 online permits are obtained online and the drawing is held 4 months in advance. So if you would like to go in March, you need to apply between the 1st and 30th of November. There is a $5.00 fee and you can select 3 dates. If you are chosen, you have 14 days to respond, or your permit is put back into the system. Remember that the number of people in your party is the number of permits issued. So if a person with a group of 6 is chosen, there are only 4 permits remaining for that day. 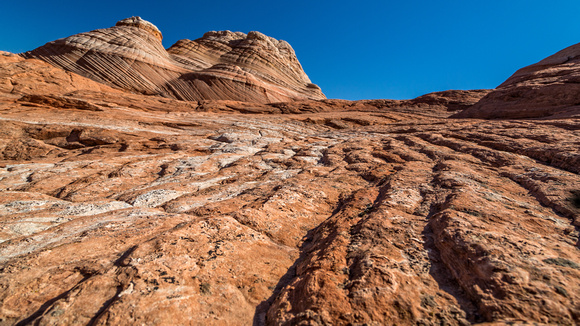 Walk-in permits are held via lottery every morning at 9:00 AM at the BLM office in Kanab, Utah. Make sure that you are aware that AZ and Utah are on different time zones! The lottery to obtain permits for are held every day – for the next day. Meaning that a permit issued Monday is valid for the Tuesday hike. Permits for Sat-Mon are awarded on Fridays.

We had a group of five that wanted to hike, so Heidi filled out the application and we waited for the drawing. It’s an intense experience waiting and wondering if you will be selected. You find yourself looking around the room wondering who will be among the chosen few. Once your application is completed, you will be issued a number for the lottery. The staff member may also remind you that every time that he drops a bingo ball representing your number into the hopper, your odds of obtaining a permit just lowered. The total number of applications reached 42 on our day. Which as it turns out is pretty average for midweek. But remember, that isn’t 42 people, it is 42 applications and each could represent up to 6 people.

Everyone starts checking their watches and a collective sigh is heard each time a person runs into the room to fill out a last-minute application.

At 9:00 a.m. sharp, he turns the crank, the balls rattle around and a number is drawn. Number 16 is called and it’s a group of two. Eight permits left.

Heidi looks at me at says “It’s just like Bingo – I got this”, and sure enough number 13 is the next number called. We are in!

The staff member looks at our application and addresses the crowd. “Remember that they are nice people, number 13 is a party of 5.” A groan is heard across the room.

Just 3 permits left. The next number is drawn and it’s for a party of 4. Oh no, there’s only 3 permits left! What happens now? The group is given a moment to discuss their options. Will they leave someone behind? Will they only go with 2? They take a pass on the permit. There are smiles across the room.

Another number is drawn and it’s for a group of 3. The lottery is over and people begin filing out, except of course, for the chosen few.

Another brief on the area is given, the rules are explained, and you will be given a map to the area. You pay a $7.00 per person fee and a tag is given to you. Half of which goes on the dashboard of your car and the other must be attached to your backpack while out hiking. We are going! 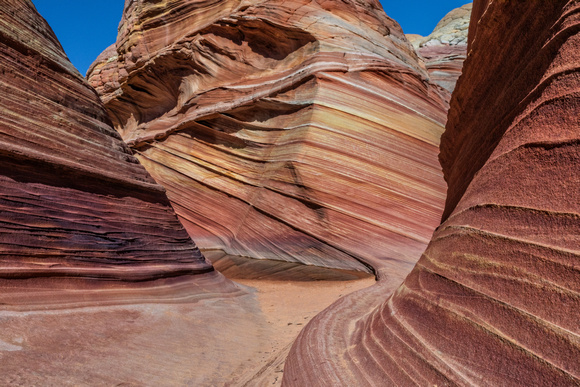 The trail head is located off of Highway 89 about an hour east of Kanab. The last 8-10 miles is on House Rock Valley Road, which is a rough dirt road that can become impassible in the event of rain.

My uncle Dennis, his son Kyle with his girlfriend Maria joined Heidi and me for the hike. Our group was joined by a friend and volunteer of the BLM – Brent. Brent makes the hike every Friday, not only to check permits, but to make certain that people are safe. His stories of people underestimating the hike or heat are amazing. While most people in decent shape can make the hike, getting lost, not bringing enough water, exhaustion from underestimating the distance, and injuries are the main causes of turning a good day into a serious situation. 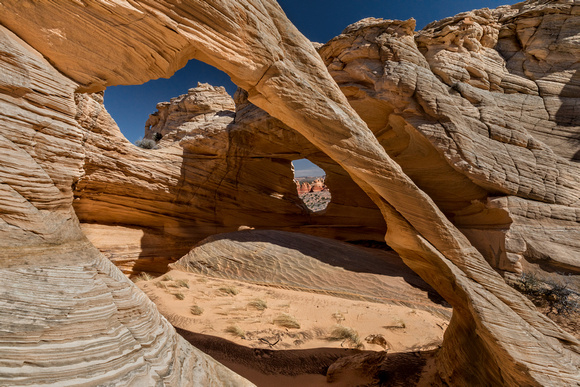 While Heidi and I typically do our hikes alone, it was great having Brent along. So much so that I really recommend that if you do get a permit that you check in town or with the BLM and hire a guide for your trek. Not only for helping you to stay on the trail (which isn’t really well marked), but there is so much else to see in the area and these sites are often tricky to get to and can lead to people getting lost. Hikers have died in the area and its backcountry and having someone who knows the area means a safer and more enjoyable trip. 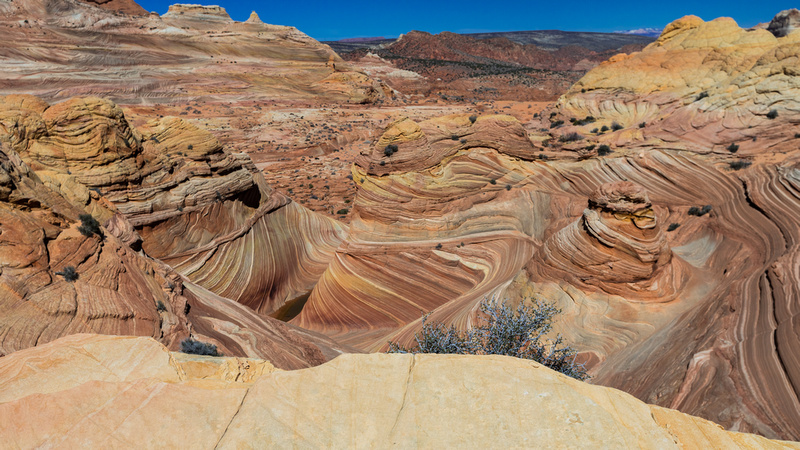 Most people travel to the Wave and back which is about a 6 mile round trip. As Brent will tell you there is so much more to see. With other stops we figured we did a little over 10 miles and were there over 8 hours as he guided us to places such as The Second Wave, Melody Arch, Top Rock Arch, The Alcove, and others. Make certain that you do your research on the area. The solitude and lack of people make the hike that much more enjoyable.

You are exposed to the sun on most all of the hike. While it was just 60 degrees when we were there, sunscreen is a must. I can’t imagine the folks that do the hike on 100+ degree days. There is a lot of deep sand to hike through and remember that you’ll be tired on your hike out. 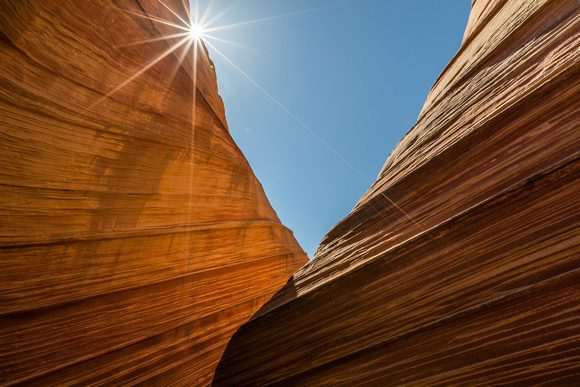 After reaching the Wave, we saw a few other people and Brent headed over to make certain that they had their permit and that they were in good shape for the day. The Wave is incredible. Though just a small portion of the area, it is a one-of-a-kind. I think everyone tries to figure out exactly what went on here and how this was formed.

Photographers had the tripods lined up, trying to get the right angle and spot, and I felt rewarded for carrying all of my camera gear. The Wave is best photographed morning and mid-day. After a few clicks and running around, the gear was packed up and we continued onward, and upward.

Scrambling up along slickrock we went on to other sites and were offered a view from high above the Wave. Once you reach the top, you are rewarded with an incredible view as well as Melody Arch, Grotto, Top Rock Arch, to name a few. 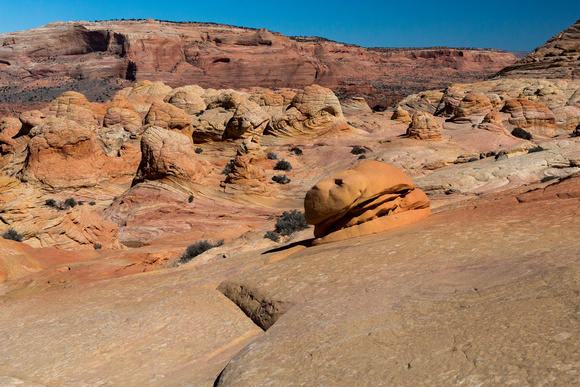 Hamburger at the Wave

Hiking back down, Brent continued to point out other features that are unique to the area and how they may have been formed. We all were busy pointing and asking questions about this or that feature.

Once back down, we passed by the Wave we posed for a few more photos before hitting the trail back to the car. We all left with smiles, as we were among the chosen few.

Take photos along the way, and looking back. These might be needed on the trip out.