WOW! That’s where the story ends for those of you that want to skip all of the details. However, if you would like to continue…

Heidi and I had talked about this trip after visiting Glacier, and though we tried to plan it out ahead of time to allow friends of ours to join us, the work schedule mandated a pretty quick decision if we were to go. So it was booked!

We started this adventure at Milwaukee airport and headed into Vegas. After a really great flight and grabbing the rental, we were off to our first destination to meet some of our family in Mesquite Nevada. Dixie, Dennis and some of my cousins were having a get–together there, and we felt obligated to crash their party. It was great seeing the family, well, except maybe for Kyle and Cody, but we sure enjoyed seeing how Jeremy’s girls had grown. Dennis and Dixie have an awful lot to be proud of. The next morning we said goodbye and jumped in the car for what would be our biggest driving leg of the journey, Moab Utah, with Arches and Canyonlands National Parks as our first destination. The 6 hour drive was broken up with some great views and vistas, and the time seemed to fly by.

We arrived at Arches in time for sunset, and we were able to drive around the park and even a walk around Windows Arch. We had quite a lot of fun watching the moonrise through the north window arch. 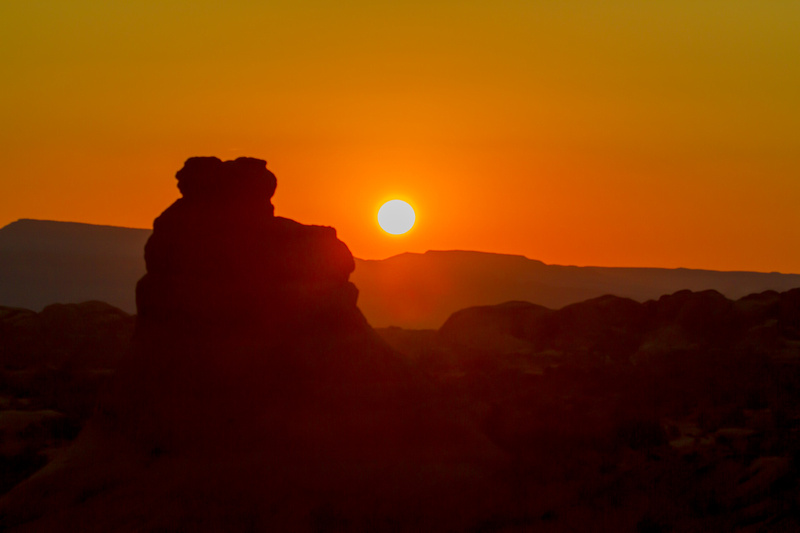 Checked into the hotel, end of day 2.

Awoke to a beautiful morning, and I headed out to get a few early morning shots while Heidi caught up on some much-needed rest. After picking her up, we bought some things that were needed and headed to the park with Delicate Arch targeted as our first hike. The weather cooperated nicely and it wasn’t that hot at all. We enjoyed the views and chatted with fellow hikers making sure we checked out the petroglyphs as well. 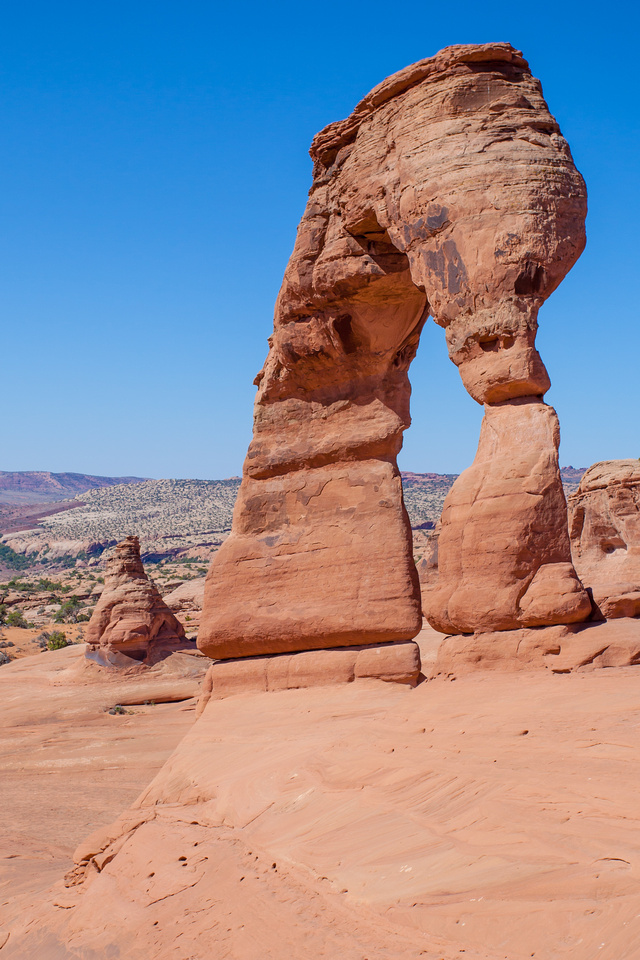 Afterwards, we hit the trail to Landscape Arch. It was a nice hike and after driving all of the side roads and being tired from the hikes, we decided to make our way to Canyonlands and get our first glimpse of what awaited the next day. We drove to the very end of the park and enjoyed the vistas along the way. My cousin had described it as a “Mini Grand Canyon” and I think that he was spot on. We saw the sign for Mesa Arch, and decided that it may be fun to watch the moon come up through it. While we were there two other couples had thought the same and we had a great time swapping stories and enjoying the evening. The brought a picnic and the chicken that they offered us hit the spot. They had been there earlier to watch the sunrise, and told us how there were around forty photographers all trying to get the famous sunrise shot through the arch. The temperature dropped and, being pretty tired, we headed back to the hotel. 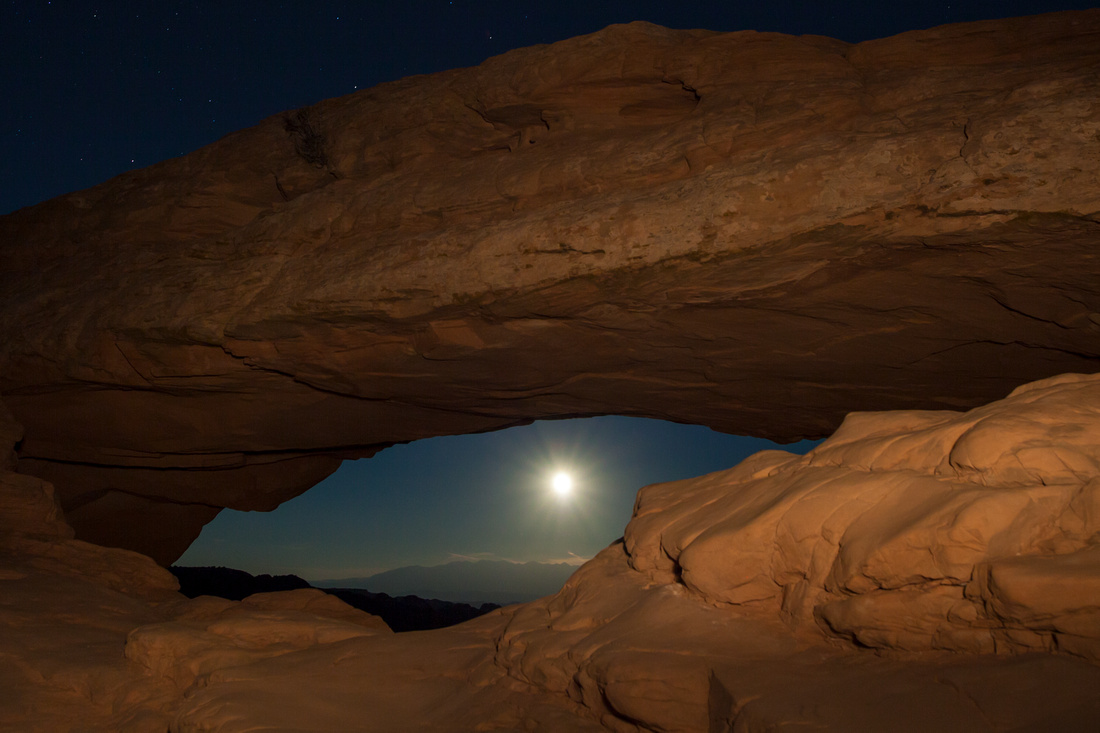 I awoke before dawn and headed to the infamous Mesa Arch, and yepper, it was slammed. Parking lot was full, and a tour bus was rolling up. I decided to try some other spots, and after shooting awhile, headed back to pick up Heidi. We did one more pass through Arches and then headed back to Canyonlands. We drove the entire park, stopping along the way to be certain that we weren’t missing anything. 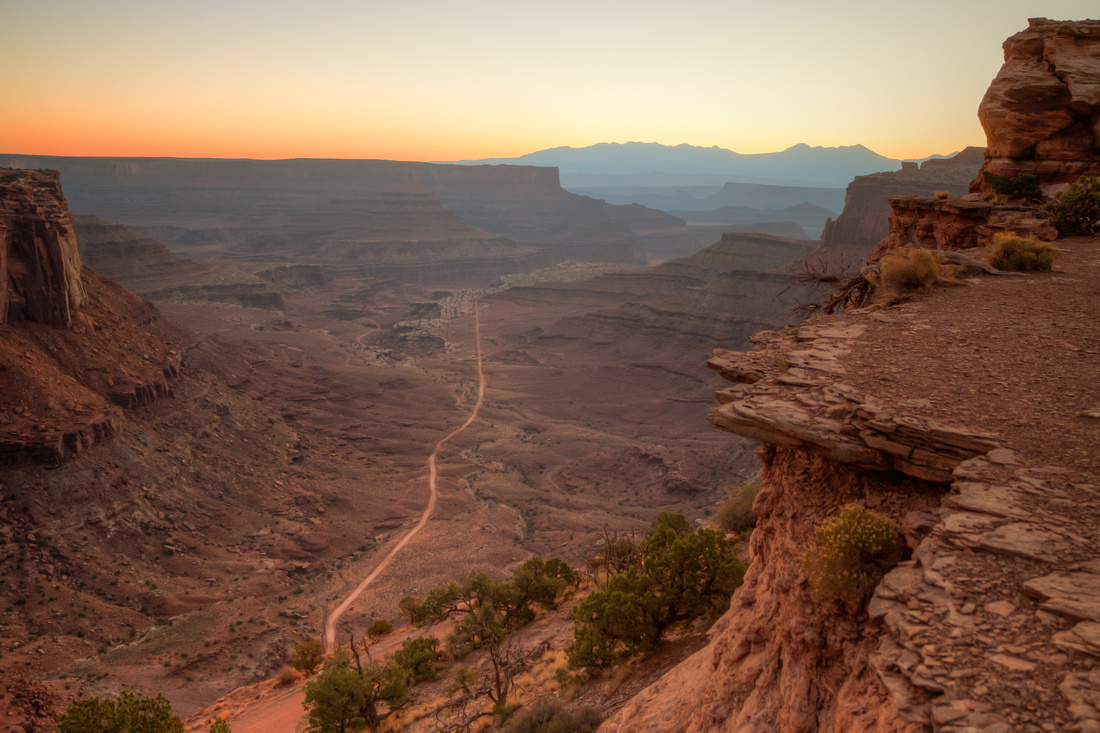 Convinced, we headed towards our next park, Capitol Reef.

We came into to Capitol pretty early and scouted out our next hike - Capitol Gorge. We traveled past the pioneer registry making our way to the water tanks. If you ever take this hike, bring plenty of water as it was pretty hot. The canyon walls are indescribable and there are more petroglyphs to be seen as well. 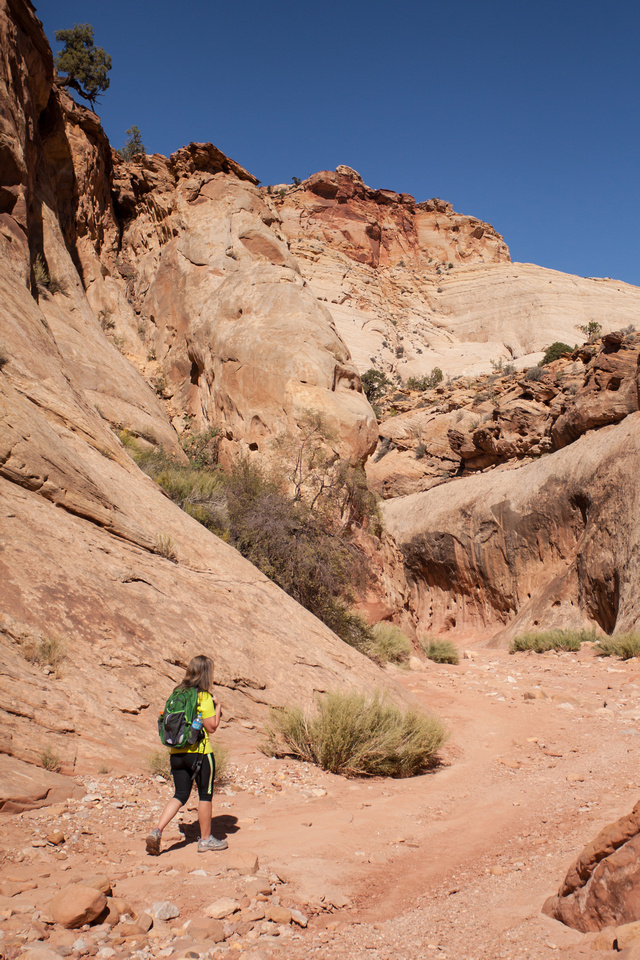 After taking the driving tour, we felt up for another hike, Hickman Bridge. This was an enjoyable hike, a little steep at first, but offered plenty of shade and the payoff – a wonderful arch. 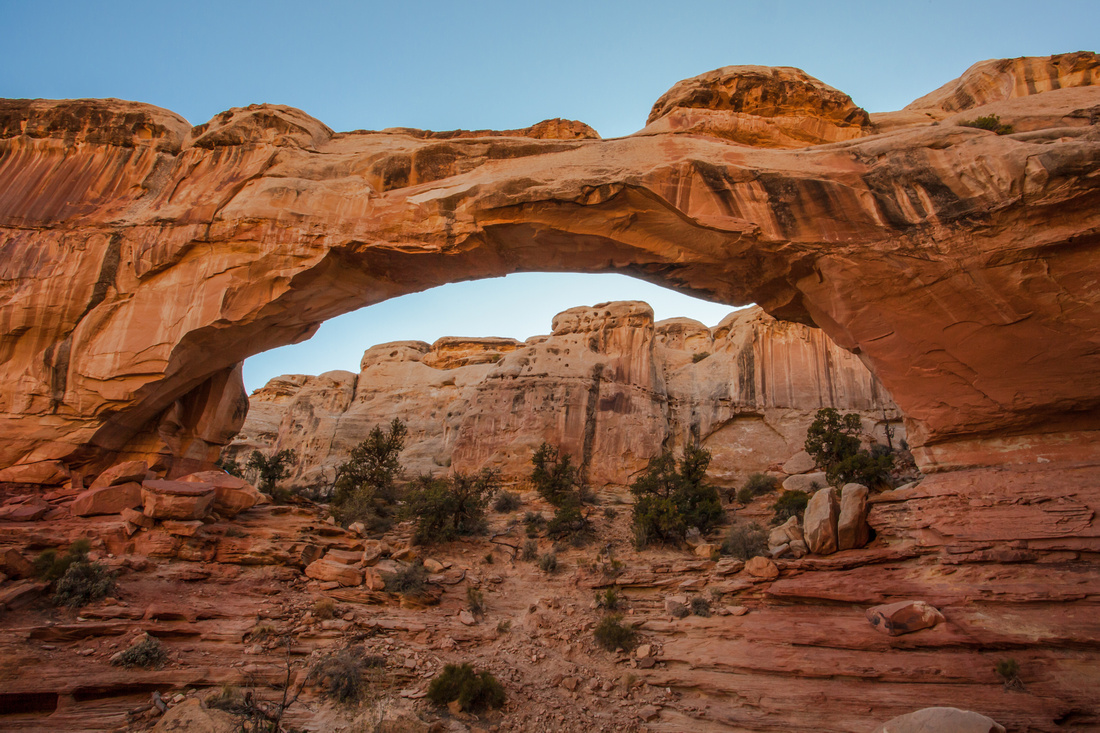 We treated ourselves to a nice dinner at the Rim Rock steakhouse in Torrey. Great day!

I watched the sun rise and then back to the hotel to get Heidi. Getting a very early start, we checked out a few of the orchards, the old school and headed out for Bryce Canyon.

The drive from Capitol to Bryce was unreal! Heading through the Dixie National Forest and the Grand Escalante should be a trip within itself! The Aspen’s were turning and the views were incredible. 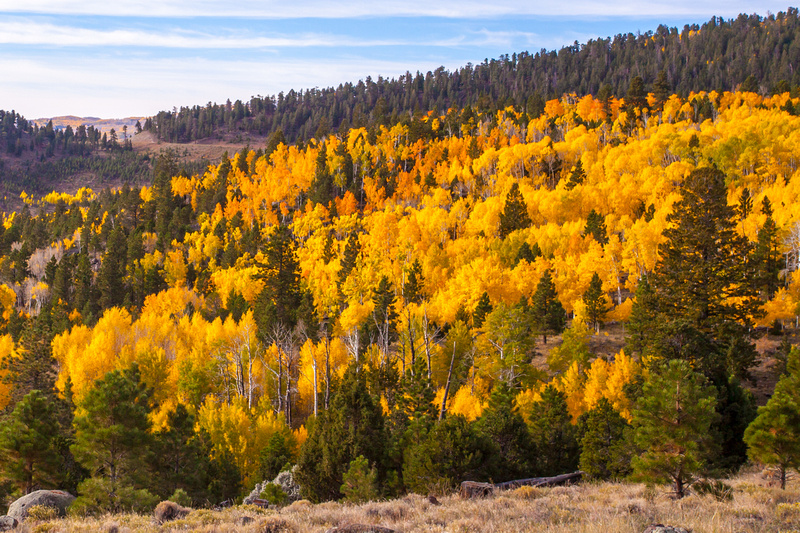 It was a pretty quick trip to Bryce and we wasted no time in taking the “Hike of the Hoodoos”. This hike to the canyon floor 600 feet below will push you, but the views are worth every step! 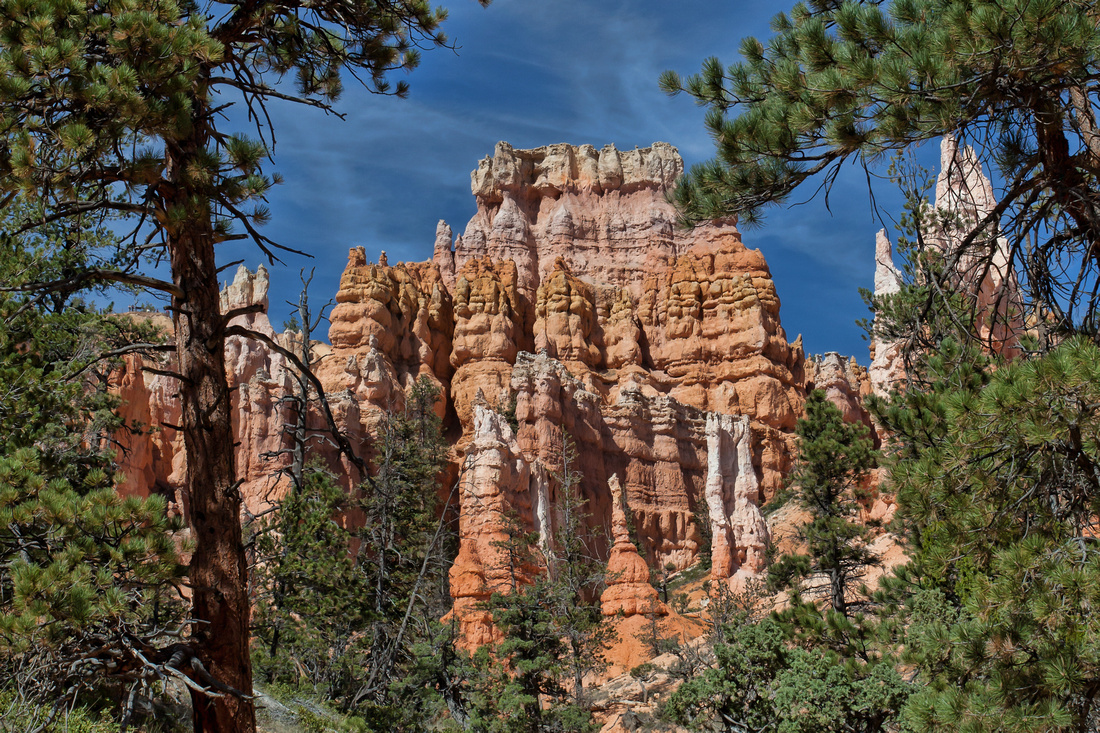 We then took the drive through the park stopping at all the Vistas, and then finally headed to Mossy Cave Trail, to check out the waterfall. 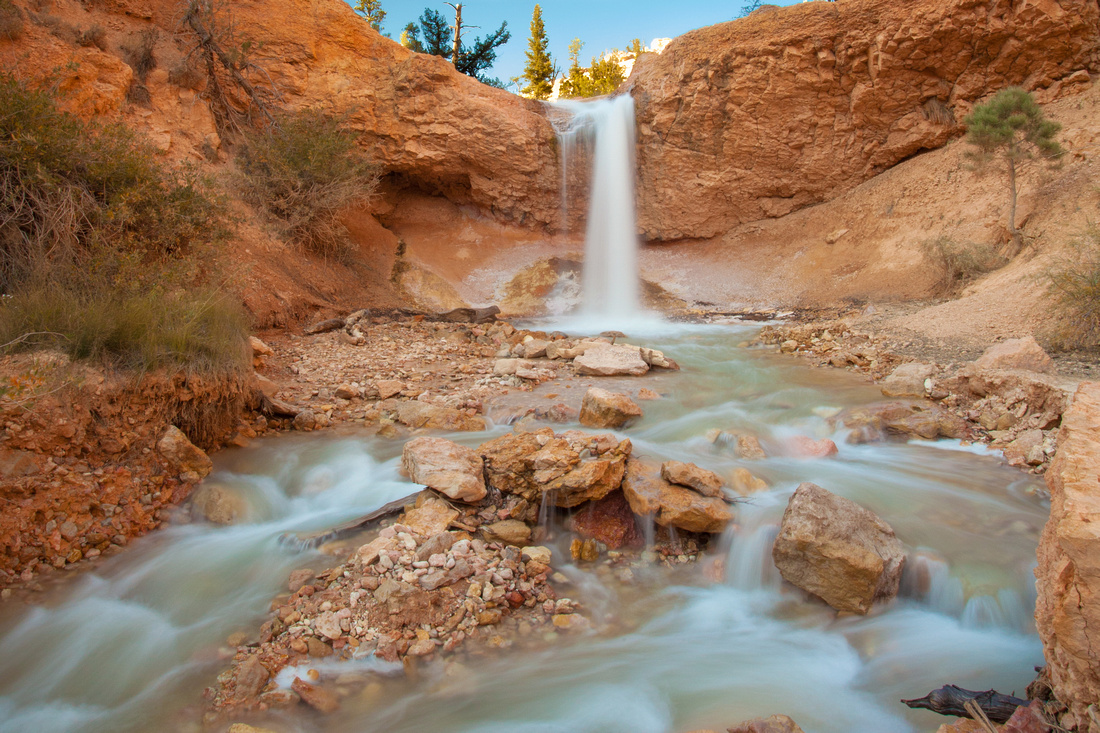 After this quick hike it was on to Kanab, for an evening with Dennis and Dixie.

Since we had been to the Grand Canyon several times before we decided to take the trip down to the park and check out some of the places Dennis had told us about the night before. We drove to the main lodge on the North Rim hiked along the trails and then took various gravel roads to spots that we hadn’t seen before. The views were pretty hazed, but the trees were showing their colors and we enjoyed our quick visit. 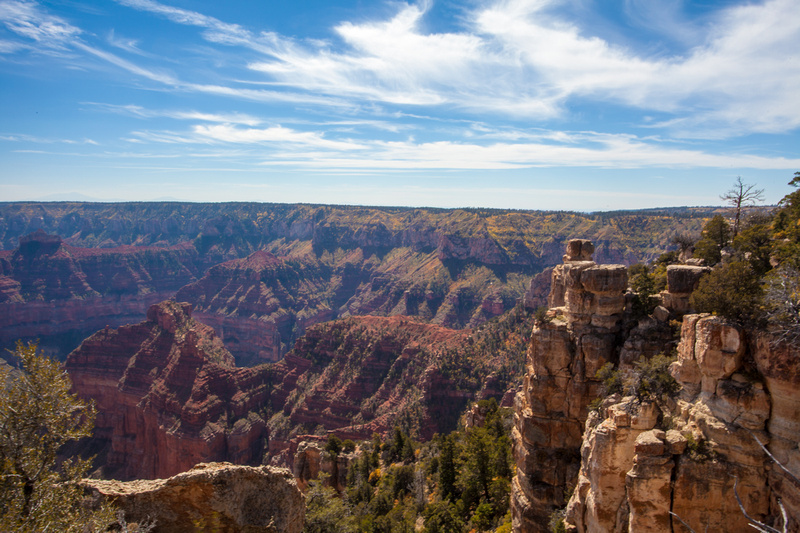 Done with the haze we decided to towards Zion and get a feel for the park that we would hike the next day. Awestruck! This park isn’t that large, however it quickly became our favorite. From the canyons, to the 1.1 mile tunnel, it is breathtaking. We drove through the park and stopped at the nicest visitor’s center I think that there is. We watched the sunset, walked along the river and headed back to enjoy a great dinner with the family.

Hiked the Narrows! The trail-head is about a mile from the shuttle stop and quickly turns to water. Yep the trail from here is about 60% water as the stream is the trail! While it was cold, the view keeps the excitement and energy level way up! We hiked back about 4 miles making it past the “junction” and then some. Someday I’d like to go back and find “The End” of this hike. This was, by far, our favorite hike, next time neoprene socks would really be a good idea as the round trip (10 miles total) in the water does get cold. This took the majority of the day and what a great one it was. 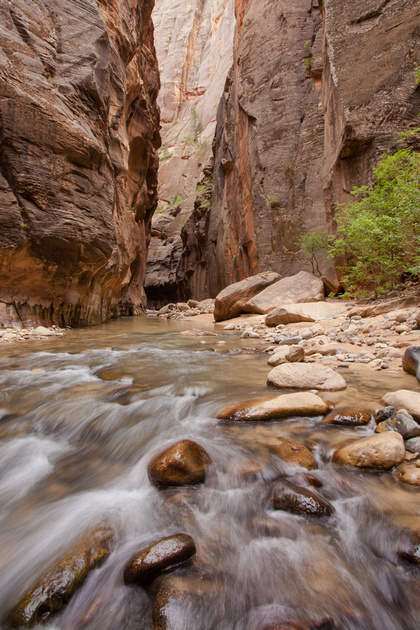 I got up early and headed back to Zion. While filming some Bighorn Sheep, I ran into a local photographer Barry and enjoyed hearing about the spots to shoot and where to head when we come for another visit. Great morning and the sheep sure put on a show. 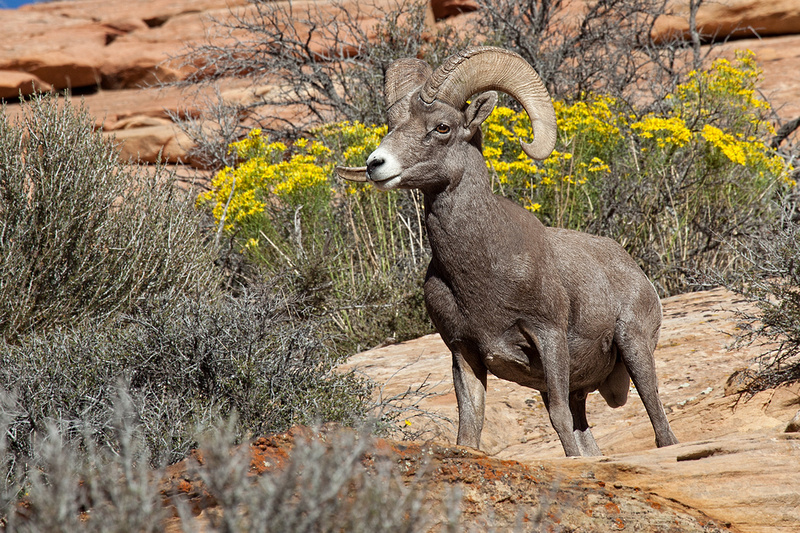 Once back, Dennis and Dixie decided to show us their “backyard” and we went via Rhino to Hog Canyon, Best Friends, and then on to Peekaboo Canyon. I can’t begin to tell you how much fun we had. The views were terrific, Dennis brought a grill to cook lunch and the drive was a blast! Crawling straight up rocks, fording streams and ripping through the sand, the Rhinos were a blast! After a quick cleanup we headed downtown for dinner and then back to the house for some “Oreo Cookie Shit” Yeah, it’s a dish that Dixie makes that is crazy good. And better yet, Kyle and Cody didn’t get any… 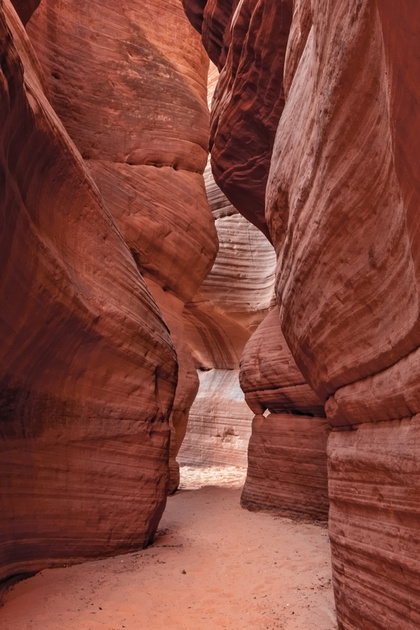 Being impressed with Peekaboo Canyon, Dennis and I loaded up the Rhino and drove there so that I could get a few photos of this slot canyon. Great time, and Dennis was awesome in playing tour guide. We then met the girls at the Barracks, another canyon, grabbed some lunch by a stream and relaxed away the afternoon. After a quick shower it was time to head out to Vegas. Thanks to Dennis and Dixie for being great hosts, tour guides and friends. We can’t thank you enough and love you dearly. 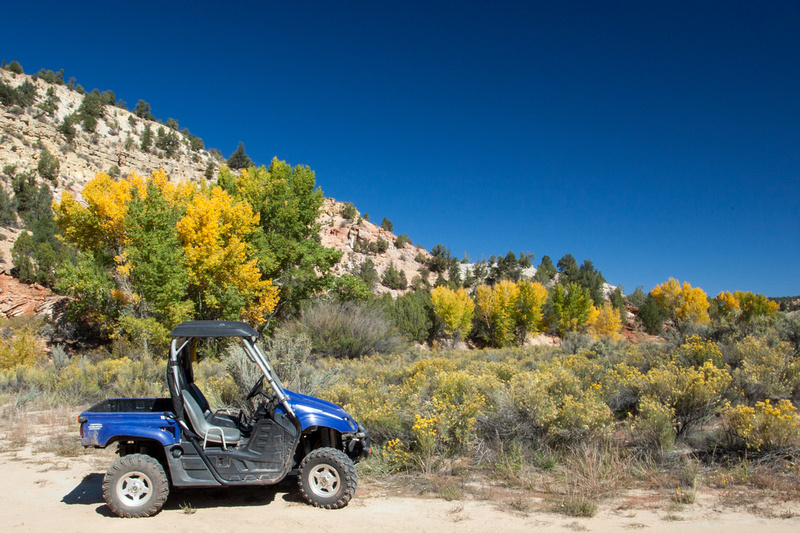 Who in the hell goes to Vegas to recover from a week of hiking and being outdoors? Well, we do now! I enjoyed the day relaxing with my girl, played some dice, had some cocktails, and got ready for the plane ride home the next morning. What a trip!

Elevation hiked: Know of 1100ft (Delicate and Hoodoo’s) Guess would be around 1800 feet as the GPS was not being friendly.